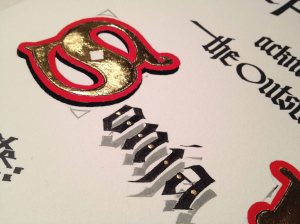 Friends of Calligraphy asked me to write the names on the honorary certificates for their Annual General Meeting at the San Francisco Public Library on May 1st, 2016.

The recipient names were done using gold leaf, Instacoll, gouache (cadmium red, jet black and neutral gray 3), a pigma micron pen and sumi ink. The lowercase letters were inspired by Hermann Zapf’s Fraktur and the versals were inspired by his Lombardic lettering.

The printed text was done by Ward Dunham.

I got started as a calligrapher in 2009, and haven't put my pen down since. Some of the services that I provide are wedding calligraphy, quinceañera calligraphy, envelope addressing, place cards and transforming inspirational citations into framable artwork.
View all posts by raoulpat →
This entry was posted in Calligraphy, Fraktur variation, Illumination and tagged Awards, Calligraphy by Raoul, certificates, Fraktur, Friends of Calligraphy, Gold Leaf, Gouache, Illumination. Bookmark the permalink.